A couple days back I wrote about the implications of first contact, but I said nothing about how it would happen. I would like to speak on that now. Currently the SETI (search for extra-terrestrial intelligence) Institute is actively searching the skies for radio signals from alien planets, in the hope that we’ll soon begin to pick up the broadcasts from extraterrestrial life, whether it be a message directed outward to communicate with us, or an old television broadcast (alien television, whatever that’d be like).

It is most likely, by a vast margin, that our first contact with an alien species will be through something like the SETI Institute. They are betting that our alien neighbors will use something like radio waves to communicate with one another, just as we do. Radio waves are not directed in a straight line, they span out in a sphere, going through all of space, but constantly getting more and more diffuse. This means that there is an expanding shell of everything that we’ve ever sent through a radio signal flying away from the earth at the speed of light. If an alien species did this too, it’d eventually reach us and we’d be able to detect it. There are numerous problems with this however. First, this signal has to travel a long way. There’s no way to tell which planets out there in the universe will support intelligent life, so the radio signals that we are looking for might be coming from thousands of light years away. If these aliens only recently developed the ability to send radio signals, we could be waiting a long time to hear from them. Second, a problem directly related to how far away they are is signal distortion. If they were thousands of light years away, then this radio signal would be expanding through space for thousands of years. With all the radiation in space and how diffuse the signal would be, we might, at best, get something entirely unintelligible. Third is the problem of development. We have no way of knowing how fast another intelligent species has developed, or will develop. We don’t even know when they started developing. The galaxy might once have been buzzing with life, but they could have all died out before we came about, or maybe other intelligent species are still banging rocks together. The list of problems goes on and on, but for now, searching for radio signals is our best bet.

Now, the much more interesting scenario for first contact, as I went over in the other post, would be for aliens to actually visit earth. Hollywood tends to think this will be a hostile encounter, but that’s not really all that likely. If these aliens came all the way to earth, why would they just destroy it? But let’s just assume for a moment that they really did come all this way to wage war on us: why? One major reason is resources. Just because these aliens have fantastic traveling power (and probably weapons) doesn’t mean that they have the ability to synthesize any resources that they might need. They could have been flying by, noticed a planet with the resources they needed, and stopped. You might ask yourself, why wouldn’t they just find another planet when they realized that we’d retaliate? The answer to this would probably be that they couldn’t. They may be so low on resources that they have no choice but to harvest our planet. I’ve heard it argued that these aliens wouldn’t be so cruel as to destroy a planet’s native inhabitants, but we can’t assume that these aliens would be anything like us. They may feel entirely different emotions than us, maybe it’s even fun for them. Another reason for violent contact may be that they want to colonize our planet. Perhaps these aliens have figured out that there aren’t enough habitable planets in the galaxy, so they decided to take ours. We cannot assume that they have the technology to terraform worlds, perhaps they just evolved to take instead of create. Species need to expand to survive, so maybe taking over the earth is necessary for them. 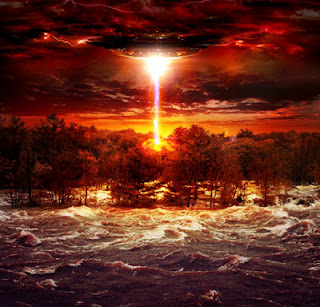 The more probable first contact will be one of peace. If these aliens are technologically advanced enough to make it all the way to earth, we would hope that they are powerful enough not to need our planet. If they have that much technology, then why else would they come here? If they don’t need anything from us, then they are either coming here to observe us or make contact with us. We gain a lot of knowledge, mostly medical, from researching various plants and animals, so these aliens might believe that they could get some of the same benefit researching life on our planet, or maybe they’re just curious. The problem with being researched is that the researchers might not be very nice about it. They may just harvest us and do experiments, with no thought towards our feelings or to our planet’s ecosystem. These aliens might also want to make an alliance with us. They may want to exchange technologies and ideas, to learn peacefully about humanity and all life on Earth. If we are lucky, they might even want to give us their technology so that we can help them by exploring or doing whatever else our alliance dictates. They may make us as equals.

0 comments on “SciFri: First Contact: How It’ll Go Down”