Abram Nothnagle takes us to the frontiers of science. Every Friday. [Editors: Wouldn’t it be nice if it were Friday?]

Sci-fi movies these days seem to be focusing on aliens. Apparently, beings from another planet have become a very popular theme in the media. Most of these movies depict these alien encounters as being very violent, wars between humans and aliens, but that’s not how it’ll probably turn out. I’m not going to use this particular post to write about how first contact will likely happen, instead I intend to hypothesize the impact that it would have on humanity as a whole.

You really can’t blame Hollywood for focusing so heavily on action in their alien encounters; after all, fight scenes between humans and aliens is what sells. However, what is most important is what comes after the initial battle, or peaceful contact. The entire argument that I’m about to make is assuming that these extra-terrestrials have actually come to our planet instead of just sending a message (which is much more likely). After these aliens have landed, flaunting their superior technology and hopefully revealing something about their cultures or biology, governments all over the world will be forced to respond. Because these aliens have made it all the way to earth, we should assume that they have a good reason for it, like colonizing other planets or gathering resources. Once another species is that advanced, they pose a threat to the very survival of the human race, thus giving us a life or death scenario that will force us into scientific advancement and a reevaluation of our entire way of life. 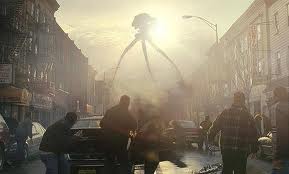 A scene from Steven Spielberg’s movie “War of the Worlds”

One of the biggest impacts that has been widely discussed is the impact first contact would have on religion and religious ideals. The Catholic church has stated that evidence of extraterrestrial life is not beyond the realm of their religion, but many religions are entirely centered on earth, with human life being the only possible intelligent life. Finding out that intelligent life exists elsewhere in the universe would force many religions to reevaluate their beliefs, hopefully in a meaningful and productive way. One result that has been hypothesized is that many people will be dissuaded from their religions, spawning more atheists, agnostics and self proclaimed rational thinkers than ever before. In the U.S. we have a problem in that many of our legislators and Republican presidential candidates don’t believe in evolution. Evolution is virtually scientifically undeniable at this point, and seeing creatures from beyond the Earth will hopefully make those in charge take another look at their beliefs. It is very important that we understand how the world works, and teach our youth how slight genetic mutations can create such beautiful life over millions of years.

The biggest impact that first contact would have, in my opinion, would be the impact it has on how our governments work. In the initial chaos that would ensue after the aliens land, governments all around the world would have to get together, both internationally and within each country. If the aliens declared war, then humanity as a whole would have to band together to fight them off. Even after the first battle was won, the alien threat would still be present, so world leaders would be encouraged to invest heavily in science to develop interstellar spaceships and methods of fighting off the alien menace. This scientific research would do more than just help us survive the interstellar war; it would help to ensure humanity’s survival for millennia to come. We would be encouraged to colonize other worlds, thus ensuring that one disaster can never wipe us out. We would develop countless medical technologies to help keep our soldiers fit while fighting aliens, medical technologies that would be passed on to the public and raise life expectancy by many years. Even if we weren’t at war with these extra-terrestrials, their mere presence would pose a perceived threat. This species would be vastly more technologically adept than us, which would make us develop technology to compete with them, both for economic reasons and with the fear that they might one day attack. 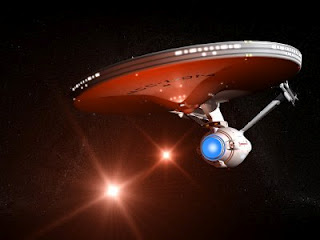 Ultimately, first contact would force us all to realize that there is so much more out there than our own internal struggles. Humanity should be united as one species, not under multiple warring flags. We need to make legislation based on evidence and foresight, not ideologies or capital gain. Science is probably the most important thing to our future, and we seem to be ignoring it. I believe that first contact would be the greatest thing to ever happen in the history of humanity.